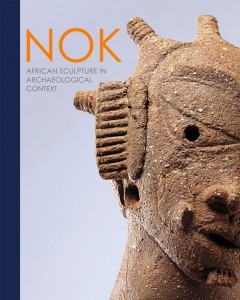 Summary: This book provides insights into the archaeological context of the Nok Culture in Nigeria (West Africa). It was first published in German accompanying the same-titled exhibition “Nok – Ein Ursprung afrikanischer Skulptur” at the Liebieghaus Skulpturensammlung in Frankfurt (30th October 2013 – 23rd March 2014) and has now been translated into English.

A team of archaeologists from the Goethe University Frankfurt/Main has been researching the Nok Culture since 2005. The results are now presented to the public. The Nok Culture existed for about 1500 years – from around the mid-second millennium BCE to the turn of the Common Era. It is mainly known by the elaborate terracotta sculptures which were likewise the focus of the exhibition. The research of the archaeologists from Frankfurt, however, not only concerns the terracotta figures. They investigate the Nok Culture from a holistic perspective and put it into the larger context of the search for universal developments in the history of mankind. Such a development – important because it initiated a new era of the past – is the transition from small groups of hunters and gatherers to large communities with complex forms of human co-existence. This process took place almost everywhere in the world in the last 10,000 years, although in very different ways. The Nok Culture represents an African variant of that process. It belongs to a group of archaeological cultures or human groups, who in part subsisted on the crops they were growing and lived in mostly small but permanent settlements in the savanna regions south of the Sahara from the second millennium BCE onwards. The discovery of metallurgy is the next turning point in the development of the first farming cultures. In Africa the first metal used was not copper or bronze as in the Near East and Europe, but iron. The people of the Nok Culture were among the first that produced iron south of the Sahara. This happened in the first millennium BCE – about 1000 years after the agricultural beginning. While iron metallurgy spread rapidly across sub-Saharan Africa, the terracotta sculptures remained a cultural monopoly of the Nok Culture. Nothing comparable existed in Africa outside of Ancient Egypt and the Mediterranean coast. The oldest, securely dated clay figures date back to the early first millennium BCE. Currently, it seems as if they appeared in the Nok Culture before iron metallurgy, reaching their peak in the following centuries. At the end of the first millennium BCE they disappeared from the scene. There is hardly any doubt about the ritual character of the Nok sculptures. Yet, central questions remain unanswered: Why did such an apparently complex world of ritual practices develop in an early farming culture just before or at the beginning of the momentous invention of iron production? Why were the elaborate sculptures – as excavations show – intentionally destroyed? And why did they disappear as suddenly as they emerged?