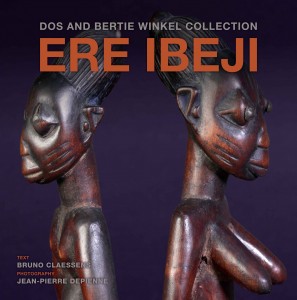 The Dos and Bertie Winkel Collection

The ibeji, or twin-figures of the Yoruba people from Nigeria and Benin, are among the first sculptures that amateurs of African discover. In the great pantheon of traditional art from this continent, their presence is prominent. Made by artists who are part of the largest cultural group of Africa, the Yoruba people from Nigeria and Benin, they serve as temporary seats for the spirits of children that were born as twins but who died in their childhood. As ritual objects, these figures are handled with great love and care. First, by their mother; and after, if she passes away, by their surviving sisters and brothers. The way that ibeji are taken care of, as if they are living children that have to be fed and cleaned, and that are adorned with precious amulets and body ornaments such as necklaces, bracelets and anklets, demonstrates us how important these sculptures are as spiritual abodes for the Yoruba people.

Ibeji figures are made over a vast territory. They have been created through centuries by succeeding generations of artists who are part of one of the most prolific artistic traditions of West Africa. This resulted in a rich variety of regional styles. Some figures demonstrate the talent of particular leading artists, while others were made under the influence of leading masters. It results in a series of recognizable sub styles and iconographic details to represent these male and female figurines. Next to the creation of art works, serving to emphasize the power of kings and local leaders, or the creation of sculptures that are used in different Yoruba cults such as for Shango, or the divination ritual, known as Ifa, ibeji figures bring us into the intimacy of families. They illustrate the importance for Yoruba men and women to have an offspring. They provide them with a way to ensure their continuity through reincarnation.

As aficionados of African art, Bertie and Dos Winkel encountered their first ibeji figures in 1970, during one of their many sojourns in Africa. They became impassioned collectors of these sculptures and assembled a collection of great quality and typological variety. Subsequently, they began to ask questions: questions to do with the true identity of these remarkable figures, questions about the artists who made them and about the people for whom they were intended. It brought them to the idea to have their collection documented and subsequently published in a book. As author of this work, they called upon Bruno Claessens. He formulated a number of answers by delving deeply into numerous publications on Yoruba culture. The text he produced makes it possible to better situate the ibeji of the Winkel collection. In addition, and through the many fine photographs by Jean-Pierre Depienne, owners and collectors of ibeji figures will be helped to find answers to some of the same questions they may have. It will help them in their attempts to make attributions to particular artists, studios or regional provenances. Furthermore, the book also provides them with well based interpretations about the use and function of their ibeji. It will provide them with interesting information about the represented scarification motifs sculpted on the body, the representation of different regional hairstyles, and the modelled representations of adornments. In addition they will discover the importance of the different adornments that have been added to many ibeji figurines.

The book makes us aware of the ibeji figures as the temporary abodes of deceased children who were born as twins. These figures locate their souls in anticipation of being reincarnated. Therefore, the ibeji figures are more than only works of art. For the Yoruba they must be taken care of and nurtured, just as their other children that are still-alive. One day, their souls will be reincarnated in newborns.